Metcalf was untroubled in winning his four qualifying events before leading all the way in the four-lap final. The consistency of Phoenix Elliott paid off with a well-deserved second place, while the improving Noah Sandilands grabbed third after a great battle with Mason Robins.

Earlier in the program, Hunter Mason looked to have booked a place in the Championship final only to have mechanical issues while leading the B Final. Dom Colmore too was unlucky when he ran off the track in the same race and was excluded. Jake Corbett and Regan Dossett continued to show improved form.

Bryan Miller who last meeting won the WA Flat Tracker Title has continued on his winning ways, this time in the 500cc division with a great all the way win, in the Final. The top qualifiers were State Champion Matt Marson, who went into the Final undefeated and teenage sensation Luke Killeen who recorded the fastest time of the night. But Miller beat them both from the gate and while Marson and Killeen battled each other ahead of Jack McDiarmid, Miller rode away with the win. Declan Killeen and Jarryd Ziedas were also on the card.

With the State Championship listed for the next meeting at Pinjar Park one of the best combinations in recent years, Reece Liptrott and Jesse Thomas underlined their credentials with a strong night, winning two heats and the Final. Their main opposition came from Jeff Bishop/Juston Winchester who won two heats and the young combination of Jack Fewster/Jonah Sita. State Champs Darren Nash/Ash Shield debuted a new bike but had clutch problems which sidelined them for the night.

Former speedway rider Sheldon Gill made flat track racing look easy with five wins from five starts. With recently crowned State Champ Bryan Miller returning to 500cc’s, along with Matt Marson, Gill’s main opposition on the night came from Christopher Gordon who might have stopped Gill’s winning ways except for a flat tyre. In the frame were James Keen, John Hough, Brian Watson and Glen Robins. A field of eleven contested four lap races before a six lap Final.

Five starts five wins. Mason made the 250’s his on the night and despite the presence of State Champ Linkin Metcalf, Mason was masterful. With great gating and wonderful track craft he won his four heats comfortably. Metcalf could have won the final but a costly error when he fell and slid into the air bag opened the way for Mason to complete a dream night. His younger brother Hunter along with Trevor Dossett rode well but the night belonged to Colby Mason.

A highly entertaining eight heats of 110cc racing culminated in a great final that saw Coby Robson emerge victorious after a race long struggle with Phoenix Elliott and Mason Robins. Neither of who could find a way past Robson who had gated superbly. Others to impress on the night included Pace Sturmfels and Ollie Corbett while Harmony Francis also showed great speed at times.

50cc’s get plenty of track time

Another eight timed events for the youngest riders at Pinjar Park saw a field of six riders practising for the big time. While there are no winners and no chequered flags, there is always plenty to smile about. Kaden Keen, Kaiden Allen, Blake Colmore, Jy Robson, Braxton Sutherland and Johnothan Forrest made up this week’s field. 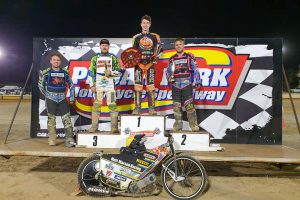 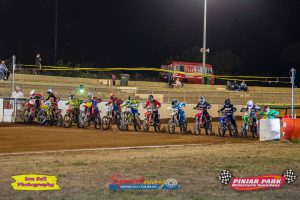 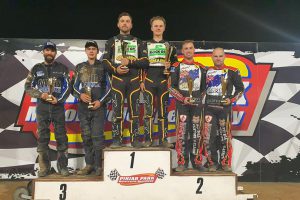 Sneak A Peek At This Web-site