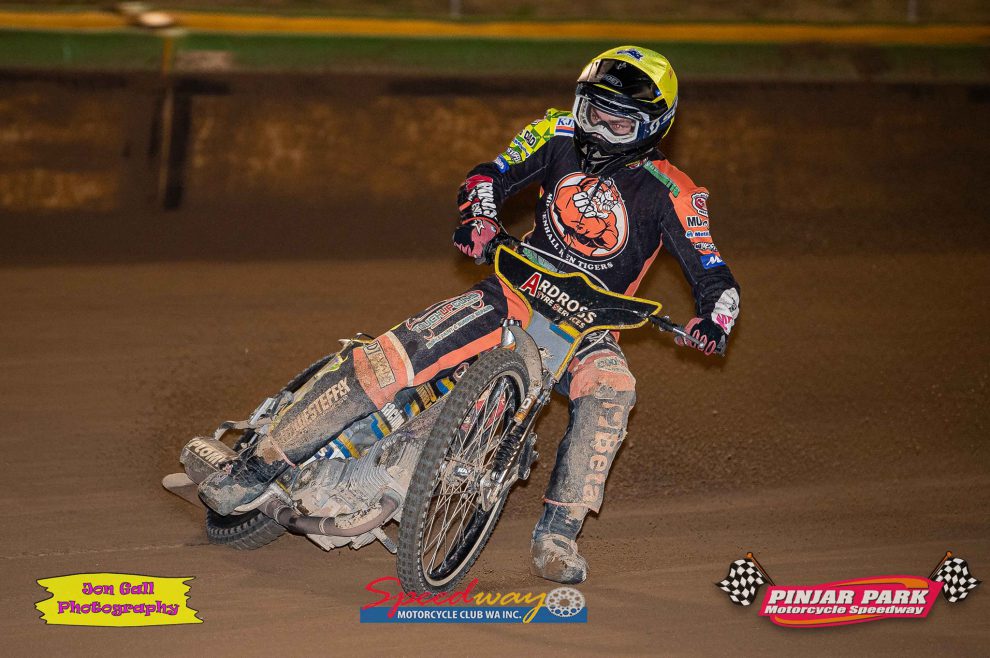 Marson combined superb gating with excellent track craft to qualify with top points and then elected to run from the outside gate in the Final. He was never headed and took a well-deserved and popular victory. Former WA Champion Dan Winchester was second and Kobee Ziedas third. Veteran Frank Smart who also qualified for the Final fell during the race and eventually finished fourth.

It was a night of incidents in the Solos with Jarryd Ziedas crashing during practice. He was out for the night with a badly damaged bike and some bruising to his shoulder. However, the major solo incident was during the running of the B Final when Declan Killeen rode Des Heys back wheel bringing them both down. Bryan Miller who was following had nowhere to go and dropped his bike to avoid the pair. Heys and Miller were alright but Killeen suffered a broken leg.

A stunningly good last corner pass saw Darren Nash / Ash Shield take an unlikely win in the Sidecar Final when it appeared that Reece Liptrott / Jesse Thomas had the race in their keeping. Sidecar racing was bolstered by the return of Mark Drew / Matt Young. The heat racing was particularly competitive. In a nasty looking turn one encounter passenger Steve McQueen was knocked from the side of Jack Fewster’s outfit. Stephen McMurray / Jayson Williams did their best to avoid the stricken McQueen who suffered a broken hand.

Just missing out on place in the State Final at the previous meeting spurred Mick Godbold on to great things with a clean sheet winning five races from five starts. James Keen was in good form as was Brian Watson. Jai Davis, Scott Townson and Scott Bartlett made for a small but competitive field of Flat Trackers.

Adam Fewster / Thomas Grigson had a fantastic night of racing winning all their heats plus the Final. In the absence of Jake Harvey / Tyler Solomon, the relatively new combination of Chayne and Porsha Roe provided strong opposition.

Thirteen 125cc Solos turn it on

In their final hit out before the State Title at the Woffy track on December 19th, thirteen riders took to the track for sixteen heats plus an A and B Final. It was no surprise that Luke Killeen, the current WA champion and Australian champion emerged from the night undefeated. He met some spirited opposition on the night particularly from Linkin Metcalf, Mitchell McDiarmid and Hunter Mason. In his first ride of the night McDiarmid set what is arguably the fastest time recorded on the new Pinjar junior track of 39.96 seconds.

As their experience grows so their riding improves. Mason was able to annex the Final courtesy of a fantastic start. Earlier in the night McDiarmid had won three of their four Heat races. Both Mitchell McDiarmid and Xander Smith also had some separate trial runs on the 250’s.

Both Phoenix Elliott and Tyler Madgen are producing some excellent 110cc rides. Madgen would win the Final but Elliott was victorious in three of the four 110cc Heats. Both boys also step up and run 125cc’s. A busy night for both who were joined by Mason Robins, Cody Prime, Pace Sturmfels and Coby Robson in the 110’s.

The 50cc boys had five opportunities to practice their track and bike knowledge and skills. Ollie Corbett, Blake Colmore, Jax Cuttriss, Kaden Keen and Pace Sturmfels were ever eager to do their laps. 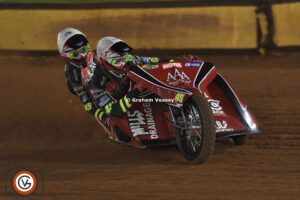 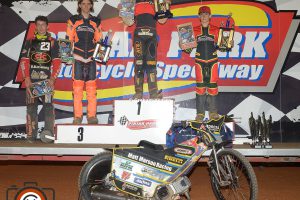 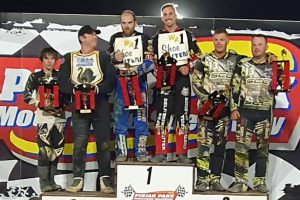